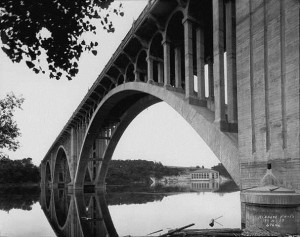 The Twin Cities of Minneapolis and St. Paul owe their origins to the Mississippi River—for its water power and its river commerce. As these river towns grew, the also became host to one of the largest urban communities of Norwegian immigrants in the United States.

These stories came together in a tour co-sponsored by MNSAH and the Norwegian American Historical Association (NAHA). The tour focused on the work of five immigrant engineers from Norway who played major roles in shaping the aesthetics and engineering of the river as it winds through both cities. In addition to the history of the bridge structures, the tour discussed several rehabilitation projects, exploring the collaboration between historians and engineers in efforts to preserve historical authenticity while providing for current and future travel needs.